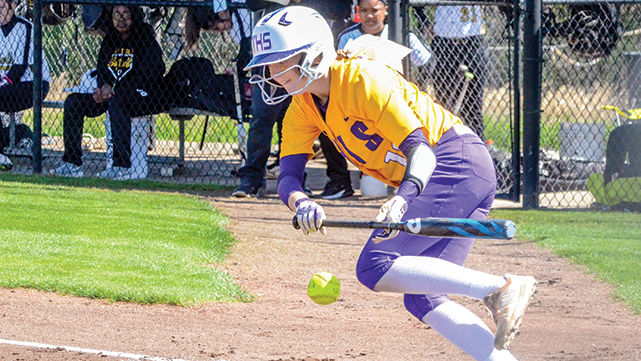 Caleb Turrentine / The Tribune Tallassee’s Chloe Baynes has reached base in 68.9 percent of her plate appearances this season. 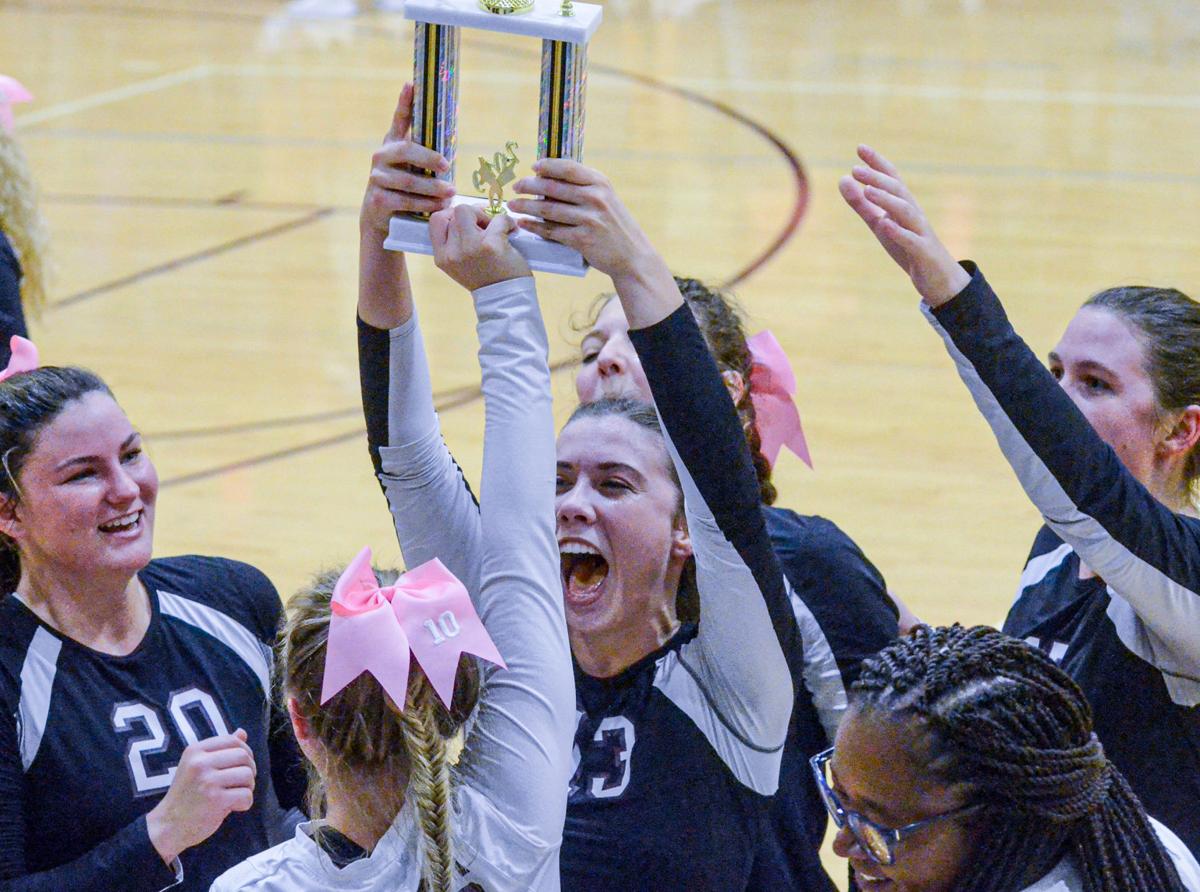 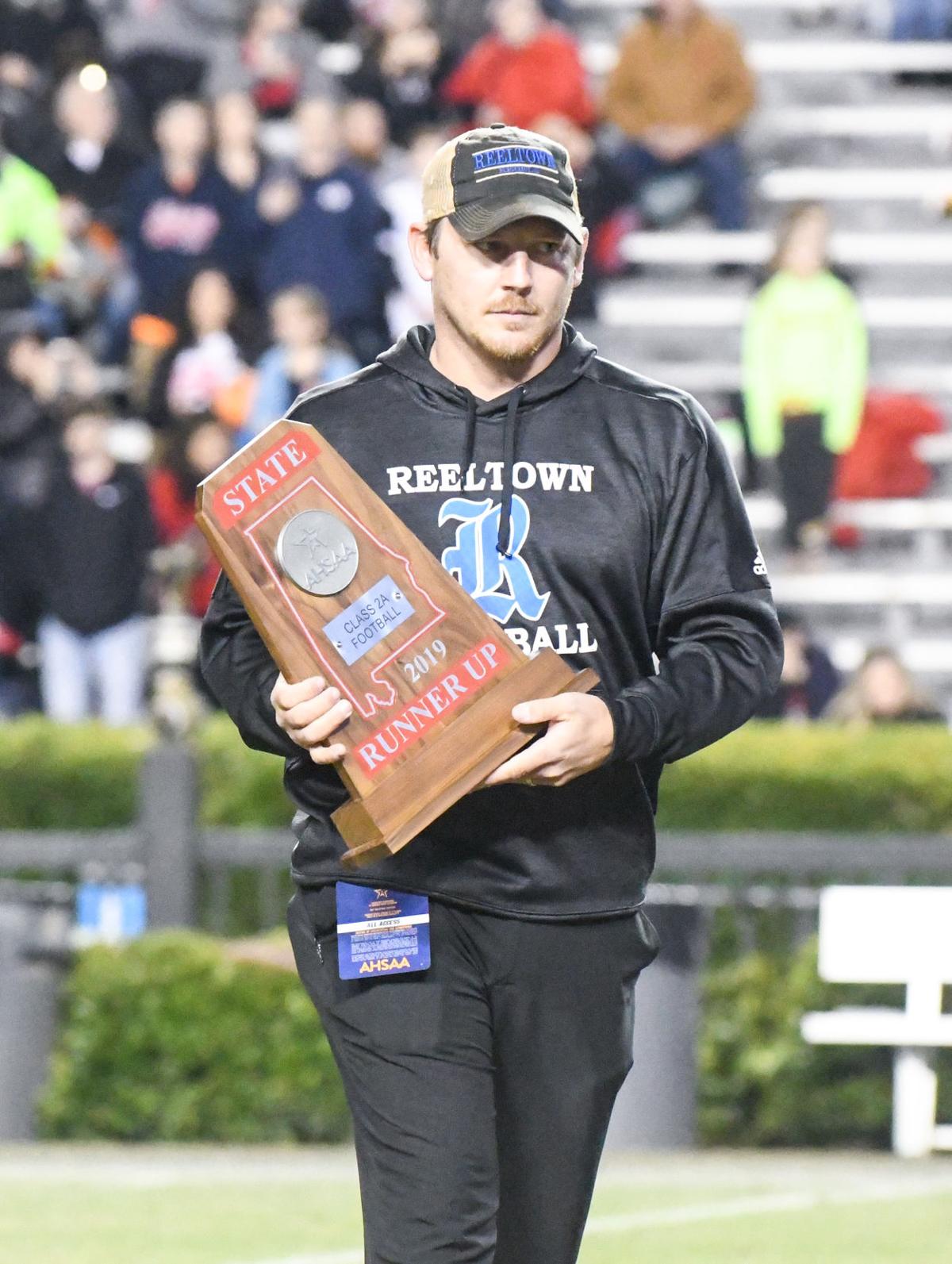 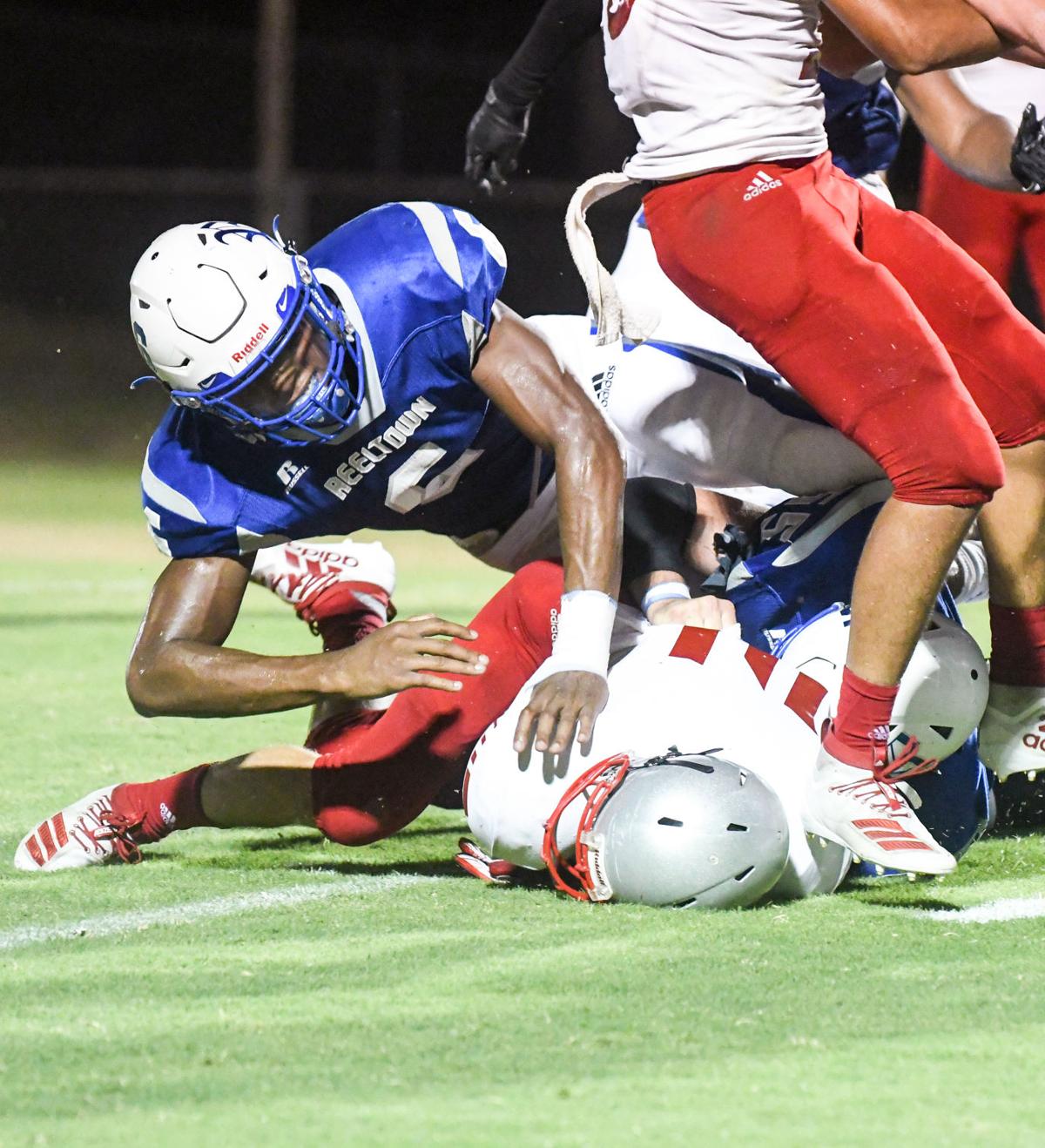 Reeltown’s Eric Shaw (6) was named a finalist for the Alabama Sports Writers Association Class 2A Lineman of the Year after leading the Rebels with 125 tackles this season. 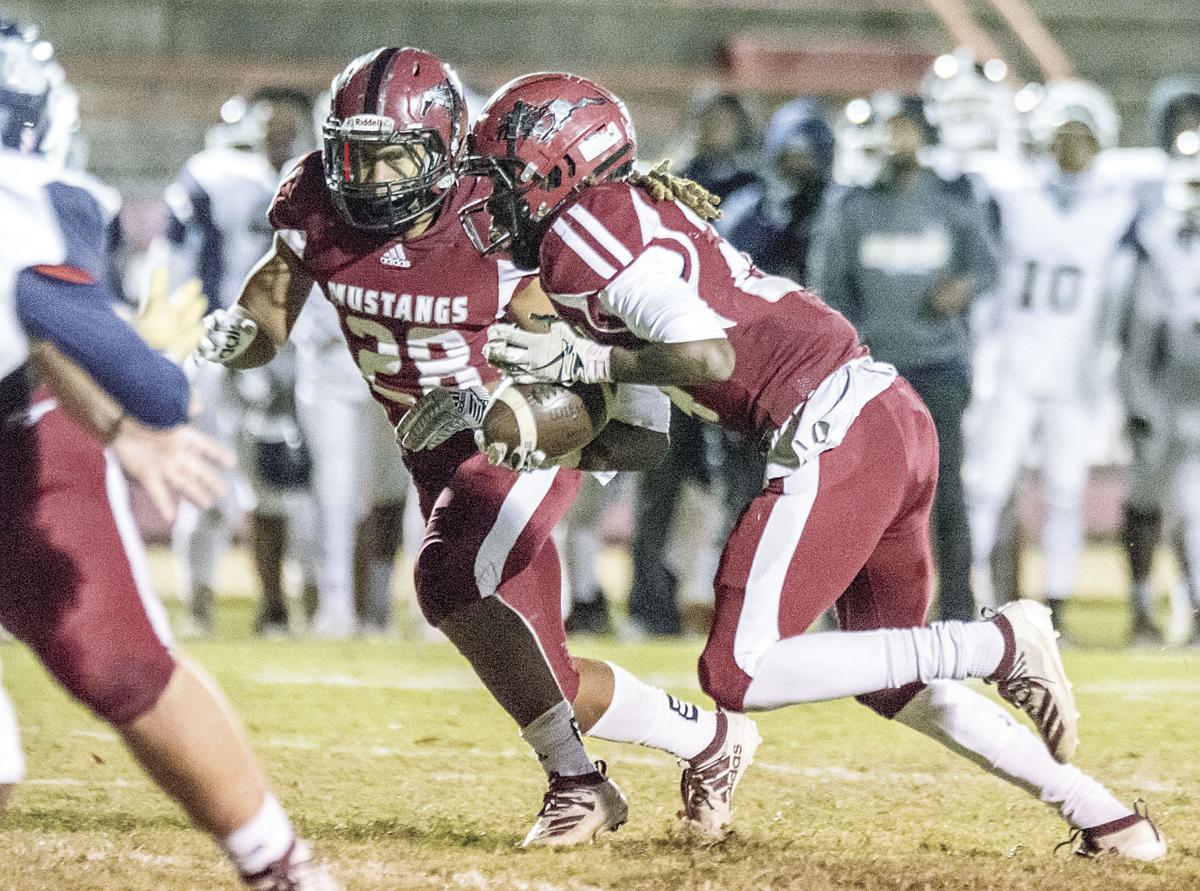 Stanhope Elmore's Tray Duncan (24) runs behind the jumbo package near the goal line. 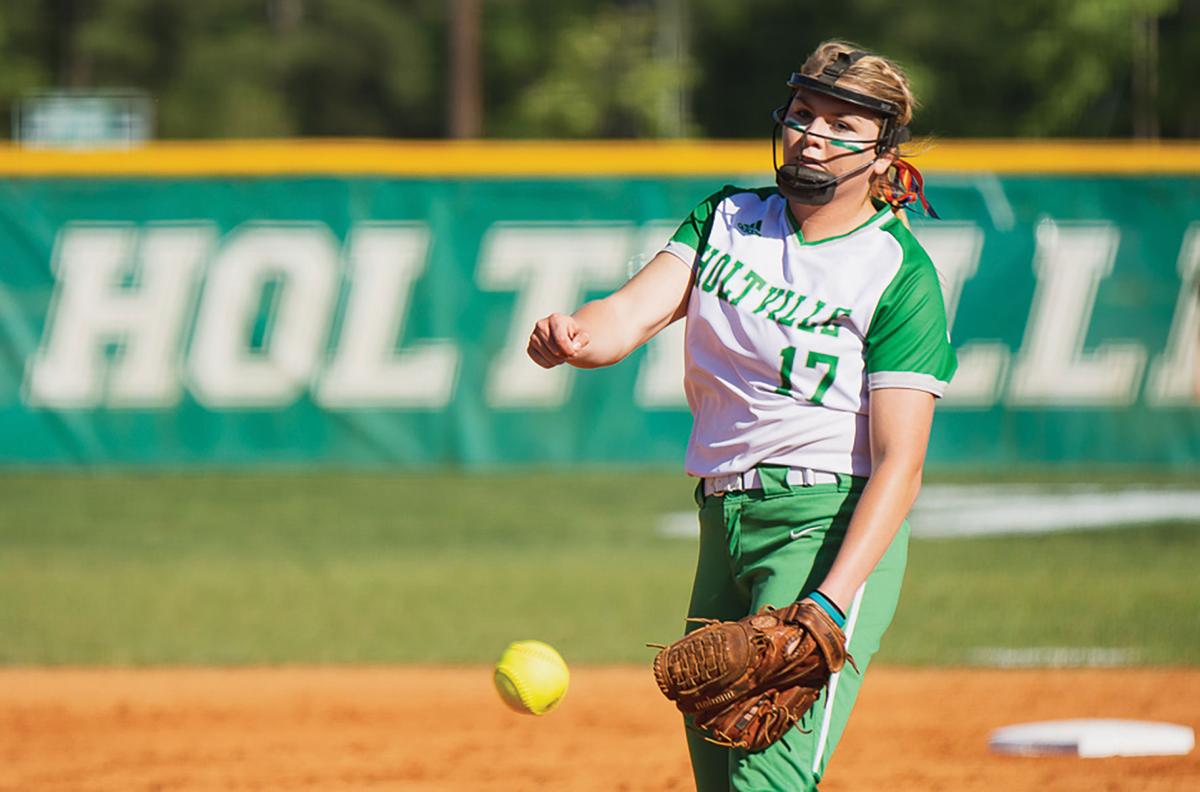 File / The Herald Holtville’s KK Dismukes recorded 316 strikeouts in 211 innings in the circle this season.

Caleb Turrentine / The Tribune Tallassee’s Chloe Baynes has reached base in 68.9 percent of her plate appearances this season.

Reeltown’s Eric Shaw (6) was named a finalist for the Alabama Sports Writers Association Class 2A Lineman of the Year after leading the Rebels with 125 tackles this season.

Stanhope Elmore's Tray Duncan (24) runs behind the jumbo package near the goal line.

File / The Herald Holtville’s KK Dismukes recorded 316 strikeouts in 211 innings in the circle this season.

The accolades for Reeltown’s football team this season were endless.

The Rebels once again went undefeated in Class 2A Region 4 to win the title outright and they were one point shy of finishing the regular season with a flawless record. But nothing was more impressive than Reeltown’s run to the state championship, which it eventually lost to Fyffe.

Over the first four rounds, the Rebels had a pair of dominating victories and two gutsy ones. The most thrilling came when Reeltown elected to go for a two-point conversion in overtime of the state semifinals against Leroy. After a flag on the first attempt, Cameron Faison took the handoff and bullied straight up the middle for the game winner.

“The obvious foundation (our seniors have laid) is getting to the Super 7 but it’s so much more than that,” Rebel coach Matt Johnson said. “They’ve done it right way. They are young men and not kids you have to always keep an eye on. It’s an exceptional group.”

Tallassee was well represented on the big stage in 2019 but two athletes were recognized on a national level.

Tyrek Turner was invited to the first AHSAA Elite 100 boys basketball showcase in Hoover. Turner, a forward for the Tigers, was one of just 100 players throughout the state invited to participate in the camp in front of more than 45 college coaches from across the country and he said the experience was unique to anything else he has done in the past.

Tallassee softball outfielder Chloe Baynes racked up the accolades after a strong freshman season. MaxPreps announced its national high school underclass All-American teams at the end of June. Baynes was not only named to the all-freshman team but she also earned the honors of National Freshman Player of the Year.

Wetumpka had never brought more than nine wrestlers to the AHSAA Class 6A Championships before the 2018-19 season. It had never placed at state as a team but it did just that in 2019 with a second-place team finish in Huntsville.

“We broke a lot of records this year, so it’s pretty awesome,” then-Wetumpka coach David Crunkilton said. “We did fall a little short of first, but I still wouldn’t trade it for anything because these guys battled hard.”

But most importantly, it had never claimed three individual gold medals in one weekend, and the Indians also accomplished that feat. Xander McWilliams (106 pounds), Kyler Adams (120) and Mason Blackwell (170) were all crowned state champions.

No. 10 for Elmore County volleyball

After seeing Holtville sweep Handley in straight sets, Elmore County got the matchup it wanted in the Class 4A Area 5 championship but it knew it would not be easy.

The Panthers were looking for revenge after being swept by the Bulldogs earlier in the season but the nerves were high to start the match and Holtville took advantage of that, jumping out to a 5-1 lead in the opening set.

However, Elmore County found its groove and never looked back on its way to a 25-17, 25-22, 25-10 victory. The win clinched the Panthers’ 10th straight area championship as they have not lost a match in area tournament play since 2009.

“This is an incredible feeling,” ECHS coach Kim Moncrief said. “I actually had tears and I think that’s the first time I’ve shed some tears. They have worked really hard and we’ve had a lot to overcome this year.”

Edgewood athletics had a big year in 2019 as three teams took home state titles. The boys basketball program got things started by holding Autauga scoreless in the first quarter of the championship game before knocking off its rival 38-21.

The fun continued in the spring when the Wildcats finished off their second consecutive state title in softball with a 7-0 win over South Choctaw behind an MVP performance from Mary Michael Burnham. The volleyball team joined the party in October when Edgewood erased a two-set deficit to defeat Glenwood to finish off an undefeated season on top of AISA.

Edgewood’s volleyball team was also featured on SportsCenter’s Top 10 for a play during its state run.

Tray Duncan ran for 203 yards and four touchdowns on 37 carries to help Stanhope Elmore clinch a spot in the second round of the AHSAA football postseason. The Mustangs’ 35-13 win over Paul Bryant was the program’s first playoff victory since 2010.

The win also marked SEHS coach Brian Bradford’s first playoff win in six years as a head coach. Stanhope finished the season with a 9-3 record, its best finish also since 2010.

“Everybody was 100 percent bought in,” Bradford said after the game. “We’ve been preaching all week, all season, that if you buy into what we are doing, we will win some football games. I think we played well as a team.”

Eric Shaw was one of the most highly recruited athletes from Tallapoosa County in recent memory. He had more than 20 Division I offers and eventually settled on South Carolina.

Despite tearing his ACL midway through his junior year, Shaw started receiving a lot of attention midway through January and the offers started pouring in.

“It’s really special, but I really didn’t expect it,” Shaw said. “It all came out of nowhere. I kinda knew there were teams that wanted me, but I thought the injury would affect it. I thought they would be scared to offer me.”

In addition to his recruiting prowess, Shaw had several other accolades including being named to the Alabama-Mississippi All-Star Classic — the first from the county since Dadeville grad Anfernee Jennings, who now plays for Alabama — and earned a spot on the Alabama Sports Writers Association Class 2A First Team, where he is a finalist for the 2A Lineman of the Year.

For the first time since 2012, the Holtville softball team reached the AHSAA State Tournament. The Bulldogs won three games at the Class 4A East Central Regional including a 6-2 victory over Leeds to clinch a spot at Lagoon Park.

KK Dismukes was named the Gatorade Alabama Softball Player of the Year.

“Dismukes is a phenomenal athlete in every aspect of the game,” Stanhope Elmore coach Virginia Barber said in a release. “She’s tough on the mound and I believe she leads the state in home runs. She’s also a special person, the kind of teammate that everyone should be.”

She finished her senior season with a 33-7 record in the circle and posted a 1.23 ERA, striking out a staggering 316 batters. At the plate, Dismukes had a .587 batting average with 23 home runs and 70 RBIs.

It’s not every day a youngster from Elmore County gets to compete on a national stage, but Tribe Elite Athletics gave 10 local athletes a chance to do so as they qualified for the USA Track and Field Junior Olympic National Championships across 16 individual and relay events.

In late July, some of the National Championship qualifiers traveled to compete in Sacramento, California elevating themselves amongst the nation’s top youth track and field athletes.

“Each of these athletes have extraordinary potential; in fact, all those affiliated with our club do,” Tribe Elite coach Rob Weighall said. “This stems primarily from the above-average commitment and discipline these athletes have developed within themselves.”

Macey Stewart and Woodrow Dean set new personal records when they traveled to their respective state championship meets in fall 2019.

Stewart dominated her preliminary race in the 100-yard freestyle at the AHSAA Class 1A-5A Swimming and Diving Championships in Auburn and somehow did even better in the championship race. She posted a time of 53.55 seconds, which was nearly three-tenths of a second better than the rest of the field, to win the gold medal.

Dean became the first runner in the history of the Tallassee cross country program to finish a 5K race in under 16 minutes. Dean beat his old personal record by nearly 30 seconds, crossing the finish line at the AHSAA Cross Country State Championship in 15:51.85 to capture second place in Class 5A.

After blowing a late lead, the Holtville girls basketball team fought through an extra period and made some late free throws to beat Billingsley 32-29. It was the program’s first win since January 2016, ending a 56-game losing streak.

“It was electric in there,” Bulldog coach Jason Franklin said. “The girls were excited and the crowd was going crazy too. No one probably expected that to happen when they showed up, so it was pretty special to get to do that at home.”

As soon as the extra period began, Holtville became the aggressor and after scoring the first bucket, it never trailed again. Summer Hutcheson made the only field goal for either team in overtime while Rylee Helus and Tori Headley each hit a free throw to help secure the victory.

Elmore County did not have the biggest team at the AHSAA Class 4A Track and Field Championships in Gulf Shores but that did not stop the Panthers from going in with high expectations. The Panthers had seven podium finishes, including two individual wins by DJ Patrick, on their way to finishing second as a team.

In the triple jump finals, Patrick fell short of his personal best but still defeated the closest competition by 5.5 inches for his first win. He jumped a total of 46-0.5.

Patrick put the rest of the state on notice during the 400 where he fell less than a quarter of a second from the state record. He finished with a time of 48.44 in the finals, taking first place by more than 1.5 seconds.

Caleb Turrentine is a sports writer for Tallapoosa Publishers Inc.