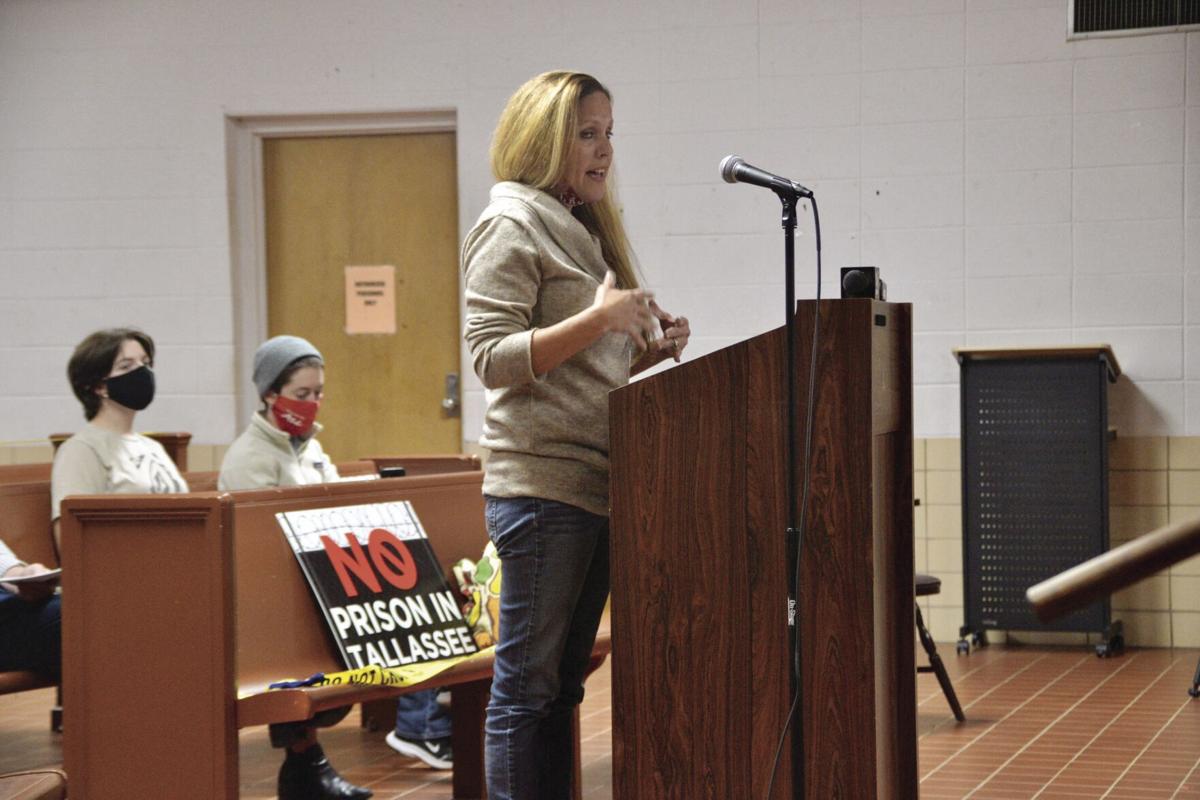 (Carmen Rodgers) Leslie Ogburn a representative for No Prison for Tallassee addressed the Tallassee City Council in opposition to the new prison that is proposed for construction just outside of the city limits. 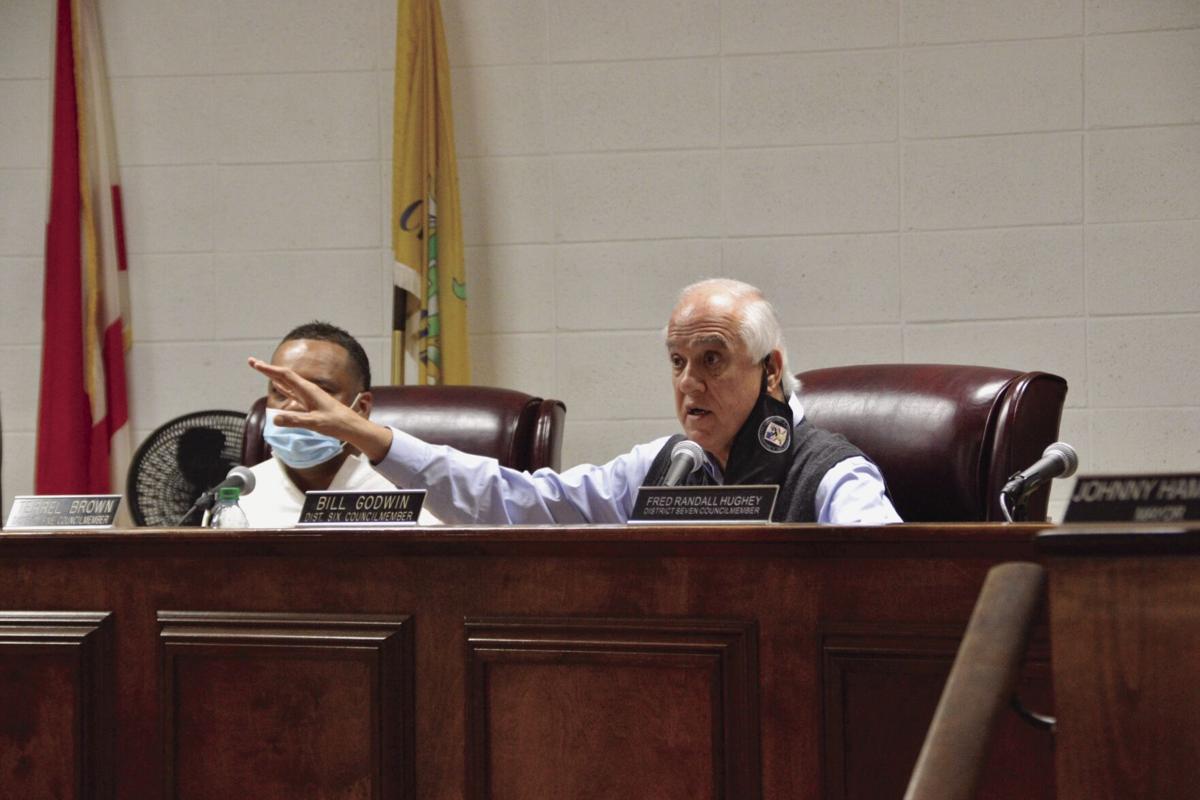 (Carmen Rodgers) Councilmember, and Mayor Pro Tem, Bill Godwin stated his position on the construction of a new prison slated for construction just outside the Tallassee city limits.

(Carmen Rodgers) It was standing room only during most of the Nov. 24 council meeting that was held inside the chambers at City Hall.

(Carmen Rodgers) Leslie Ogburn a representative for No Prison for Tallassee addressed the Tallassee City Council in opposition to the new prison that is proposed for construction just outside of the city limits.

(Carmen Rodgers) Councilmember, and Mayor Pro Tem, Bill Godwin stated his position on the construction of a new prison slated for construction just outside the Tallassee city limits.

(Carmen Rodgers) It was standing room only during most of the Nov. 24 council meeting that was held inside the chambers at City Hall.

It was standing room only during most of the Nov. 24 Tallassee City Council meeting that was held inside the chambers at city hall. Most were there to hear community representatives address the council regarding the mega prison that is set for construction just outside the Tallassee city limits.

Leslie Ogburn, a resident of the Tallassee community area, first addressed the mayor and the council.

"I am a representative for No Prison in Tallassee, which is a community organization," Ogburn said.

According to Ogburn, the greatest issue the organization has is what she called a lack of transparency.

"The biggest issue that the community has right now with the council and the mayor is the lack of transparency with this matter,” Ogburn said. “Mayor (Johnny) Hammock has gone on the record stating that he has been dealing with CoreCivic since he first became in office and was required to sign a non-disclosure agreement. The community is unhappy with this turn of events because it prohibited him, who is supposed to work for us and others, from giving us information that if we would have had a long time ago, to state how we feel about this.”

Ogburn said if area citizens knew about the potential prison location sooner, they could have done more to stop it.

"The entire community of Tallassee should have been able, given the chance, to speak about these matters years ago, even before Gov. (Kay) Ivey announced that the prison was coming here,” she said. “It is not an attack on the council. It is not a personal attack on the mayor. These events should have been laid out for us by the city, by the council, by the (county) commission, and by the state way before now. That is the predominant problem in this community and I think people lose sight of that and in the back and forth.”

Morgan Duckett, a student at Auburn University, also addressed members of the council and Hammock during Tuesday's meeting.

"I am here because Mayor Hammock and the city council have basically betrayed the people of Tallassee," he said. "The prison industrial complex is a term used to describe the overlapping interest of government and industry that use surveillance, policing, and imprisonment to the solution to economic social and political problems. The result of this overlap is mass incarceration."

According to Duckett, industries, such as CoreCivic, often make their way into communities like Tallassee by lobbing local government officials. However, Hammock has maintained he has not financially benefitted from any dealings with CoreCivic.

In 2018 Hammock and engineer Jeff Harrison, with CDG Engineers, agreed it would be beneficial to visit a facility of similar nature to get a firsthand look at how infrastructure ties into it.

"The City of Tallassee paid for my plane ticket and the ticket for our engineer. Never once did CoreCivic pay for me, any of my meals, nor did I for them. We bought our own meals, our own plane tickets, and (Alabama Department of Economic and Community Affairs) paid for our hotel rooms," Hammock said in a February interview when news first broke a mega-prison could be located in the Tallassee area.

Duckett also brought up Hammock's increase in pay as superintendent of utilities and his July arrest for an alleged misdemeanor harassment charge.

Duckett only had three minutes to address the council and following his remarks, councilmember and mayor pro tem Bill Godwin stated his position.

"I hope you understand that the City of Tallassee is not in the business of selecting prisons,” Godwin said. “We can't do that if we wanted to. This was done by the governor's office."

According to Godwin, once the prison is operational, the city will see an increase in revenue from utility services and that will be a beneficial economic impact for the city.

"We took the position as a council — if it comes, if it doesn't come, that's fine. If it comes, yes, we will take advantage of it economically any way we can. Why would we not," he asked.

Godwin also addressed rumors the city would fork out $4 million to furnish the facility with utilities. He also explained once that infrastructure becomes operational the city will benefit financially.

"The group has already agreed to pay for the infrastructure," he said. "We are not. We are paying nothing — nothing. When the water starts running, the sewer starts working, the gas starts flowing, we will make a profit. We are not having to pay with bonds and loans, that has been alleged, said. None of that's true."

"What you said at first made sense but this personal attack on the mayor doesn't have anything to do with this," he said.

Duckett then explained if Hammock had not been able to post bail he could have remained incarcerated until his trial date, and at the same time he explained the need for pretrial reform.

Pretrial reform would allow nonviolent offenders to be released before trial and lessen the incarcerated population.

"Pretrial reform is essential and is an alternative to building massive prisons," Duckett said.

Hammock then addressed both Ogburn&#39;s and Duckett&#39;s remarks, starting with transparency.

"I signed a contract," he said.

Hammock said he signed the non-disclosure agreement and could have been sued if he had discussed the matter.

Hammock also explained the Alabama Department of Corrections will operate the facility, not CoreCivic.

"This is a state-run facility," he said. "CoreCivic is not going to run this facility. The state spends more money on maintenance on the old prisons that are overcrowded. It's cheaper for them have companies like CoreCivic build them and lease them back to the department of corrections.”

Hammock also said the prison will not only bring more employment opportunities to the area, but it will also benefit much of the prison population.

"This is going to be 700-plus jobs,” Hammock said. “It's going to be 37% more program space for the people that go into prison, and 95% of them will be released from the Department of Corrections. This gives them an opportunity to be habilitated so when they come back maybe they can be a productive member of society.”

According to Hammock, while he is empathetic to those who will live nearby the soon-to-be facility, this new prison construction is the result of longstanding officials neglecting to address longstanding problems within the state's prison system. And he supports Ivey’s decision to construct three new state prisons.

"I applaud Gov. Kay Ivey for having the intestinal fortitude to make decisions that the state senate and the House of Representatives couldn't over the last several decades,” Hammock said. “It's way overdue. I am sorry it's coming here but we are going to take full economic advantage of it.”